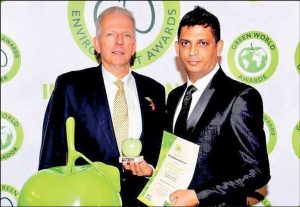 The Exterminators Ltd. won an Environmental Leadership Award in the international campaign to find the greenest individuals, companies, councils and communities around the world. Exterminators competed against more than 800 other nominations in the Green Apple Awards for Environmental Best Practice with their project, Carbon Neutral Pest Control.

Exterminators is the only pest control company in the world to win a Green Apple Award since the award program begin 24 years ago in 1994. The award was presented at a glittering presentation ceremony hosted by Liz Kendall MP at the Houses of Parliament, Westminster, London.

The judges commented: “This Sri Lankan pest control company takes extra steps to minimise the adverse effects of its operations. They focus on avoiding harm to non-target species in their applications and operate as a carbon neutral organisation since 2014 through carbon credits supporting renewable energy projects in developing nations.” As a result of this Green Apple Award success, they have been invited to have their winning paper published in The Green Book, the leading international work of reference on environmental best practice, so that others around the world can follow their example and learn from their achievement.

They could also progress to represent Sri Lanka in the Green World Awards 2019 and ‘Exterminators’ is part of the United Nations Billion Trees initiative. The Green Apple Awards are organised by The Green Organisation and supported by the Environment Agency, the Chartered Institute of Environmental Health, the Chartered Institution for Wastes Management, REHIS and other independent bodies. For additional information contact: The Exterminators Ltd. on 0117 760760